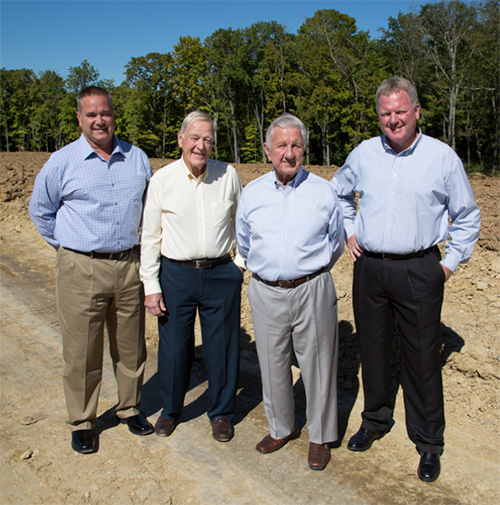 George Gerdes, Sr. was born and raised in the beautiful farm town of Lorup, Germany.  With great perseverance, he learned every aspect of the building trade as a journey-craftsman in post WWII, traveling throughout Germany and Switzerland.  In 1961, George looked to the United States as a land of opportunity, bringing his refined skills and strong work ethics.  By 1964 he started his own company as a brick layer in the Northern Kentucky area.

Tom Flesch Sr. was born and raised in Covington, Kentucky and began his construction career in 1952 starting with a construction engineering program.  He joined the Army Reserves for 6 years and then continued on with building homes all around the Northern Kentucky area, creating Flesch Custom Homes soon after.

In 1974, after working many years side by side, George Sr. and Tom Sr. constructed their first building together, an 18-family apartment building in Fort Mitchell, Kentucky.  By 1980, Gerdes & Flesch Construction was created.

George Sr’s son, George, and Tom Sr’s son, Tom, both worked with their dads early on, learning their strong work ethic, the value of superior craftsmanship, and their hands-on approach with every detail of the building process.

Just as their fathers had, George and Tom followed in their father’s footsteps and after working many years together building homes, they began Gerdes & Flesch Custom Homes, Inc. in 2002.  It is with great pride that they continue to build these quality homes in their family names.